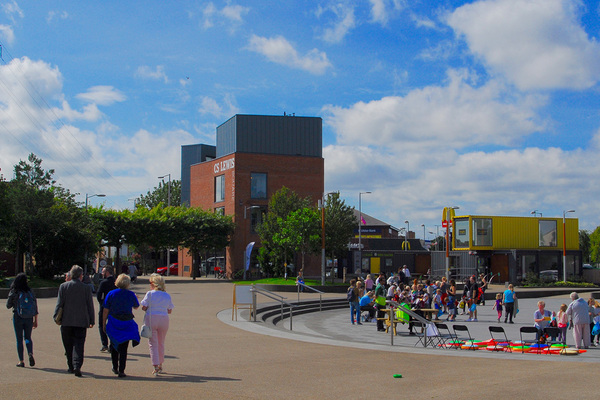 The Connswater Community Greenway is situated in east Belfast and forms a new 9km linear park with an off-road route network and series of urban spaces that follow the course of the Connswater, Knock and Loop Rivers. Situated at the heart of the Greenway is the C.S. Lewis Square which has quickly established itself as one of the most exciting new events spaces in Belfast.

Officially opened in September 2017, the project has seen the regeneration of 40 hectares of land associated with the rivers situated at the heart of east Belfast communities.

East Belfast was once the beating heart of the city’s industrial past with thousands of people employed in the linen mills, rope factories, engineering works and shipyards. Whilst the huge yellow cranes of the Harland and Wolff shipyards remain visible across much of the area, many of the old industries have now closed, these leaving a legacy of polluted waterways and derelict land. Historically these industries and local communities turned their backs on the rivers, resulting in the banks being little used, neglected and inaccessible.

In 2007 and 2008 the area experienced significant flooding. These events began to raise local consciences that action was required and the initial response by the public authorities was to explore the feasibility for an engineering-based flood alleviation scheme.

But just prior to this, a needs analysis study based upon the Northern Ireland Deprivation Measure had recently been undertaken by the EastSide Community Partnership (ESP) (a community regeneration charity). This study’s findings supported the need for a significant intervention that would improve: the health and wellbeing of people in east Belfast, the physical environment and community cohesion.

Clearly a need prevailed for a more comprehensive regeneration initiative and so ideas to secure this began to take root amongst the local communities. The resulting Greenway project was developed by a central, innovative partnership between ESP and Belfast City Council and the Connswater Community Greenway Trust (CCGT) was established by ESP in 2012 as the vehicle for the delivery of the Greenway.

Effective community engagement, undertaken over a 5-year period, has been key to the delivery of the project. Belfast City Council delegated this task to the EastSide Partnership which allowed them to benefit from filtered community feedback relating to project design and implementation, but also focus on land assembly and works delivery.

The Greenway project was delivered in two phases, with the first prioritising those areas most affected by flood risk and completed in 2014. This saw the re-engineering of the rivers along a 5km length including their partial realignment, the widening of culverts and the construction of flood walls and embankments enhancing. These measures have changed the dynamic of the river system, enhancing biodiversity and addressing a legacy of pollution.

Landscape design proposals were developed by The Paul Hogarth Company and Phase 2 of the project has focused on the development of accessible parkland along the rivers, leisure facilities including a children’s play area and sports pitches within a new landscape setting.

Enhancing connectivity has formed a key aspect of the project, with the Greenway now serving as an important off-road arterial route through the eastern part of the city. To support this, the project has installed eight pedestrian crossings and 13 new or improved bridges, these forming an important interface between communities with the public naming of the bridges harnessing a strong sense of community pride. The lighting of the route has also helped change the perceptions of the area.

Celebration of the area’s history has provided a central theme, with interpretive signage along the route highlighting historic features such as The Hollow – an ancient stone bridge which inspired the lyrics for Van Morrison’s song ‘Brown Eyed Girl’.

The C.S. Lewis Square and EastSide Visitor Centre form the striking centrepiece and principal focus of the project as a whole. The Square’s name commemorates the children’s author who was born in east Belfast, with seven sculptures inspired by the C.S. Lewis story ‘The Lion, the Witch and the Wardrobe’ providing the central theme for the space. The artwork by sculptor Maurice Harron is both gentle and engaging with local children closely involved in the commissioning process.

Situated at an intersection between the Greenway, and the main Newtownards Road which serves as a public transport corridor to Belfast city centre, the Square actually comprises a series of linked spaces, including a second walkway; the Comber Greenway, which follows a former railway and connects with a smaller urban square at the Holywood Arches Public Library. With a capacity for 2000 people, the main elliptical space regularly plays host to community events including markets, music and fitness classes. The space appeared vibrant and well used on our visit, with opportunities for passive enjoyment and relaxation clearly considered as part of the design approach. But what is perhaps most remarkable about this space, is that until a few years ago the area was wasteland where few people ventured. It is also noteworthy in that this is not a beautifully framed architectural set piece enclosed by buildings. The surrounding built form is relatively weak but the spaces have been sensitively contained through the planting of 300 native trees.

The new Eastside Visitor Centre also provides a focal point for the Square. Adorned by a striking mural featuring local celebrities, this red brick structure serves both as a visual marker on the Newtownards Road. The building was designed by two local firms of Architects, and includes a coffee shop, meeting space, gallery and visitor information point providing a venue to celebrate the areas rich industrial heritage which was previously absent. The Centre also forms the starting point for a number of self-guided trails including the Connswater Industrial Heritage Trail and several more which celebrate the areas local legends including C.S. Lewis, singer-composer Van Morrison and the footballer George Best. The Square also plays host to a new temporary pavilion called ‘Built:East’ and container village which includes a café/restaurant ‘Freight’ and a Sustrans Active Travel Hub – we heard that this may be further expanded in the near future with an 8 storey container tower!

Connswater Community Greenway is perhaps an unusual finalist in the Great Places category given its linearity and its wide range of component parts, but its overall sense of place is established through the range of characters and events along its route, bound together by sensitive landscape design which also brings cohesion.

The project has undoubtedly raised the bar in terms of design quality and it is hoped that the project will serve as a catalyst for the continuing physical and economic development of the area. All the new spaces we observed seem to be respected and well maintained with strong levels of community engagement, in part achieved through a volunteer network of Greenway leaders. What is perhaps most surprising is that the Greenway project, which has now been delivered, almost occurred by accident. The flood alleviation works had to take place and it was the community engagement for this which gave birth to the something far greater and more wide-reaching.

The Greenway has bought about positive and dramatic change to the physical environment and to people’s opportunities, health and lifestyles.

The project has addressed issues of urban decay, transforming neglected riversides into vibrant, safe and accessible parkland for leisure and events and providing flood protection for 1700 homes. People and communities which, for generations have turned away from the Connswater River system now have the opportunity to return and make the most of what has become a living landmark and valuable life-enhancing asset. Perhaps the true benefits of this project are just beginning to be felt, but the pride and passion of the local communities we met were an inspiration. This is a highly successful new place and most deserving finalist.