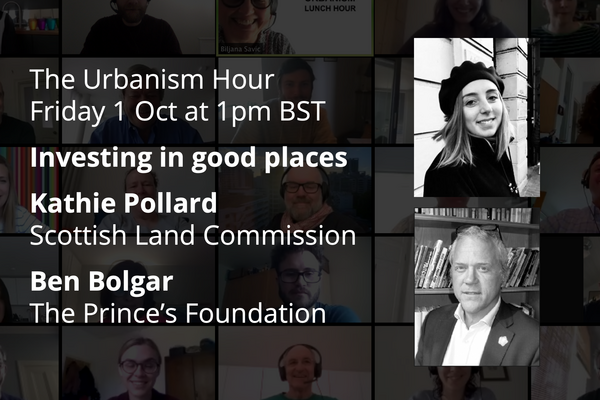 This month on The Urbanism Hour we took a look at good stewardship, which when done properly, can yield better results in terms of quality place-making, economic performance, and overall satisfaction of those who live and work there.

Ben Bolgar
Director of Stockbridge Land and The Prince’s Foundation

Having worked on designing and coding a number of new settlements over the last 20 years and focusing on planners, developers and local communities, Ben Bolgar suggests that the biggest factor in terms of the eventual outcome was land ownership and the development model. In 2016, Ben Bolgar authored Building a Legacy - A Landowner’s Guide to Popular Development, launched in the CLA’s Christmas magazine and was pleasantly surprised by the level of interest and debate around the topic. This debate continued in the Building Better Building Beautiful Commission and was further developed as the Stewardship model, which was one of the three core recommendations in the Living with Beauty report.

Along with Gail Mayhew, a commissioner, and Charlie Dugdale, who carried out the research for the BBBBC, Ben set up the Stewardship Initiative, which is supported in principle by a number of large landowners, including the Church of England, which has signed up their land to the Stewardship Kitemark. Ben outlined this journey with case studies and offer some suggestions as to how to build walkable mixed-use places instead of monocultural housing estates.

Kathie Pollard spoke about how the Land Commission’s work is considering ways in which land can be owned, used and managed to deliver wider public benefits and highlight how a land rights and responsibilities framework can help embed good stewardship in practice.

Kathie Pollard is a Policy and Practice Lead at the Scottish Land Commission, where her focus is on land markets with a particular emphasis on vacant and derelict land, and tax. She has a background working in planning policy and developing green infrastructure projects and has experience working with a wide range of stakeholders including local authorities, third sector organisations, and communities.