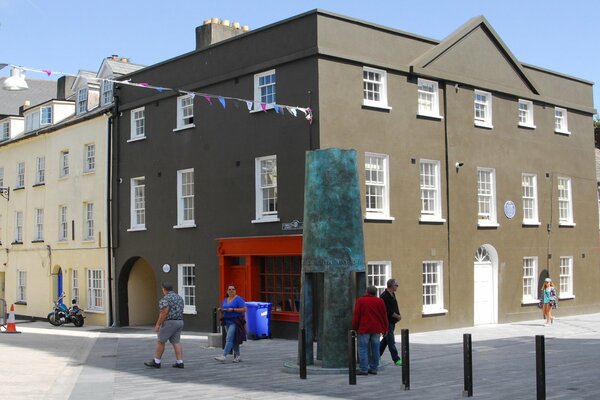 1. The vision and need for the project has been underpinned by a National Spatial Strategy, enabling a complex project, involving a range of funders and stakeholders, to be developed and financed during difficult economic times.

2. The use of a multi-faceted approach to regeneration, has sought to successfully exploit the best physical, historic and cultural assets. By combining these with a sensitive urban design approach, animated public spaces and high quality architecture, this has created a vibrant urban quarter and destination.

3. The project has highlighted the importance of having city or town architects, and how working with strong local management can achieve such a significant project.

4. Their approach to building restoration projects with apprentices and collaboration from many trades and skills so that an extensive programme can be achieved at relatively low cost, struck one as a major achievement and exemplar.

5. The construction of new housing and the rehabilitation of old houses to residential use is difficult in such regeneration areas. It has the potential to create a major change in the way citizens view city centre living, as long as it is of the quality exhibited here.

A popular travel guide described Waterford as Ireland’s least discovered city, often bypassed by tourists, and even the hardiest defender of this dockland reputation would be hard-pressed to mount a campaign based upon Waterford’s immediate allures.

But Waterford seems to be quickly repositioning itself away this old image, this clearly being exemplified by the ongoing regeneration of the Viking Triangle.

The Viking Triangle defines the limits of the ancient Viking settlement lying at the confluence of the River Suir and smaller Johns River, with Quays and The Mall defining the edges and the ancient Reginald Tower its western apex. Today it forms an historic district of the city centre, covering an area of roughly one square mile and situated to the west of the city’s main commercial heart. The principal building stock dates mainly from the 18th and 19th century, this underlain by numerous medieval remnants.

By the early 2000’s the area was experiencing high levels of dereliction resulting from a century of zero investment and neglect. Little resident population remained with housing stock typified by short term lets.

As a city, and its very raison d’etre as an historic industrial port was under threat. The internationally renowned Waterford Crystal went bankrupt in 2009 resulting in the loss of 3000 jobs. Like many provincial Irish cities, Waterford had found itself eclipsed by a large and successful capital city, also experiencing a complex set of local problems compounded by national economic difficulties.

However, the National Spatial Strategy for Ireland 2002-2020, highlighted the importance of Waterford as regional centre for South East Ireland and focus for economic consolidation. In 2007, Waterford City and County Council prepared the Waterford Gateway Innovation Fund Bid, this included a specific regeneration project for the Viking Triangle, identifying an ‘innovative, multi-layered, multi-disciplined conservation, urban consolidation and tourism initiative’. A funding package of €34 million was secured from European, National and Local Government sources.

This innovative and multi-faceted approach to regeneration has underpinned the ethos for delivery of the Viking Triangle project. Innovative because it has sought to interface a thousand years of urban history with an internationally important collection of museum objects and the architecture and streetscape of the city.

The city already had a large, underutilized museum collection but the project strategy has seen the alignment of three museums in chronological order following the line of the medieval wall – now collectively branded as the Museum of Treasures. This embraces the Viking Reginald’s Tower Museum, the new, architecturally striking Medieval Museum and the Bishops Palace Museum housed in an imposing Georgian building containing artifacts from the 17th Century to the present day. The Medieval Museum has provided a link to the impressively restored City Halls, also successfully incorporating a medieval tower and vaults which until a few years ago lay forgotten, derelict and abandoned.

The significance of the Waterford Crystal brand following the closure of the former plant to the edge of the city, was also seen as opportunity to enhance the visitor offer of the Viking Triangle. A new visitor centre and manufacturing facility, showcasing the world’s largest collection of Waterford Crystal has been housed within a re-modelled 1960s former office block and car showroom.

The project has been underpinned by a strong urban design approach which has sought to address deficiencies in the urban form, whilst enhancing permeability and the use of public space. Interventions have included the removal of an incongruous modern office block to enhance the setting of the prominent Reginald Tower, to the development of a low-cost building, occupying a prominent corner site, which now accommodates an artisan glass workshop.

Addressing the high levels of dereliction, through conservation and rehabilitation, particularly on prominent sites has also been a major priority. Where possible, these projects have reinstated historic details based on research, however, this has approach has attempted to strike a balance between architectural quality rather than striving for historic perfection. Substantial public funding has tackled several difficult projects, where the extent of restoration work would simply be unviable for private developers. These projects have supported a Community Employment Scheme, including apprenticeships for traditional trades and crafts.

The area now supports a range of new visitor, commercial, residential, civic and entertainment uses. A small council housing development has been recently completed and is already fully occupied. The area is also serving as campus for civic offices utilizing a number of the recently restored buildings.

The existing street network has been complemented with a range of new civic spaces and new pedestrian routes greatly enhancing permeability and accessibility through the area. Tired block paving, utilitarian asphalt, on-street car parking and poorly conceived planting are being replaced with bright, robust, wall to wall granite surfacing. A variety of engaging public artworks including murals, a number of Viking themed exhibits and a memorial piece to John Condon – the youngest soldier killed in the First World War. This is complemented by imaginative banners, wayfinding and interpretive signage.

Previously unused spaces are now animated through a range of activities including al-fresco dining and drinking, a Norse chess set, live bands, the screening of sports events and a winter festival.

In many ways, Viking Triangle bears many hallmarks of traditional physical regeneration initiative but it’s much more than that. Supported by a strong historical narrative and harnessing the best of their assets, their strategy has been simple yet effective. Public funding has served as a catalyst and with local buy-in this has led to an improved perception of the area. In turn this has enhanced the quality of life and competitiveness of local business which is leading to private sector investment.

The approach has achieved a remarkable impact in less than a decade, transforming the area from a level of neglect which is now difficult to comprehend, to a rejuvenated and vibrant urban quarter, through a visionary and talented local team led by a City Architect.

In the near future, further building restoration and public realm enhancement projects are planned. A reconstruction of a Viking dwelling is also due to be erected in the shell of the ruined Greyfriars Church.

Traffic management around the perimeter of the Triangle, particularly coach parking could perhaps be improved but any issues here are easily outweighed by the enhanced by the new pedestrian environment which has been delivered.

The Viking Triangle is an exemplar for both the quality of the regeneration and the way it has been achieved. The approach is clearly comprehensive, yet sensitive and unique to the place, turning a historically rich but rather forlorn place into a great one.