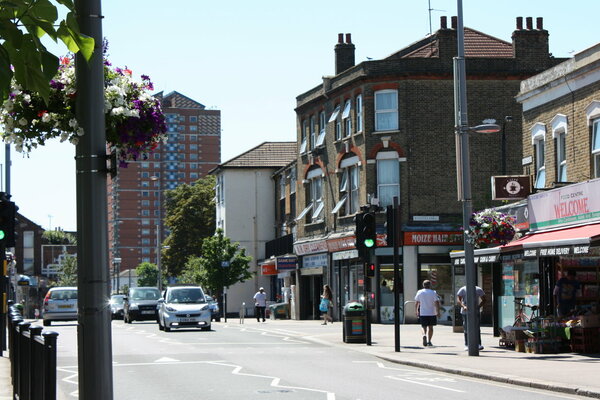 1. The opportunity to heal wounds and improve after the 2011 riots has been taken as a challenge to create new communities and businesses.

2. The continuity of political support is crucial. The ward councillors had many decades of service behind them and were inspiring local representatives.

3. A diversity of retail and social enterprise offers leads to a sense of discovery and interest across a long street.

5. The Arts-led schemes are exemplars of art creating and supporting regeneration.

Wood Street has been regenerated by a strong local community, a flexible council and an eclectic mix of creative individuals. The outer suburbs have been exposed to many pressures recently and this street demonstrates a way of overcoming them through the commitment and perseverance of stakeholders.

Top down leadership has come from the LB Waltham Forest with an Area Action Plan, a high streets strategy and attraction of external funding, developed alongside residents, businesses, community groups and others

Wood Street First, a group set up to heal community wounds after the 2011 riots and represented by Graham Hodgkiss, have led the bottom up action. Graham’s infectious enthusiasm has been a catalyst for other individual enterprises.

The challenge of mixing bottom up with top down regeneration is what happens in the middle, and here the ward councillors have brought unity. They have encouraged individual and collective activities which fuelled further change and Councillors Angie Bean, Peter Barnett and Richard Sweden were present on the visit.

TfL and Outer London funding schemes have helped repaving, security, lighting, shopfront improvements and art-led regeneration schemes. Although the Area Action Plan of 2013 has yet to be formally adopted, it has set great aspirations which are being pursued.

The street is gently curved and is surrounded by terraced houses and post-war estates. Diversity of building elevations is a key part of the character. The shop fronts are starting to be enhanced and signage is also getting better.

The street has many independent outlets and two thriving markets but only one chain, the Cooperative. Ten years ago rents were so low that many shops became warehouses. The relatively low rents now mean that social enterprises and start-ups flourish, providing a mix of retail outlets including the following:

The arts-led multidisciplinary consultancy, East, have led a number of initiatives. The Wood Street Plaza has increased footfall, created activity at the playground and reduced anti-social behaviour. The play area is within 20 minutes’ walk of Epping Forest, a new council sports facility and the main health centre. The street is enlivened by the journeys of children between the local school’s buildings at either end. Wood Street First also arranges regular social events and has much support from local businesses. East also curated the Golden Parade, rejuvenating a 1930s row of shops, and artist Verity Keefe created a unique mural to direct from station.

TfL have implemented a simple and robust 20mph traffic scheme, including reduced kerbs, wider footways, street trees and granite paving and details, which provide a foundation for the regeneration initiatives.

We were pleased to see commercial activity at all levels across the street, because the street offers a friendly local service compared to other core areas. Shops are able to express individuality and the planning policy has supported this. The application of policy has been with a ‘light touch.’ This has enabled the Georgian Village and Indoor Market to be a supportive incubator of start-ups in food, drink and services.

In addition to the grants from TfL and OLF, councillors have recognised that sometimes a relatively small contribution can have a multiplier effect. These public/private partnerships produce good initiatives. The assessors especially admired the policy that pubs are a community asset with multiple potential uses.

The Borough is focused upon improving the percentage of recycling through infrastructure improvements and the Local Plan supports high sustainability aspirations, although during our visit we saw little evidence of these being promoted on the street.

The proximity of great places to shop, walk, cycle, and play, reduces the need for car trips within a densely populated area and Wood Street’s wide range of shops, plus Post Office and primary school aids this.

The organisation ‘Beans on Balconies’ is supported by Artillery, and encourages local food growing at any scale: a great example of health, wellbeing and community working together. The ‘mini Holland’ walking and cycling improvements are also ongoing.

In 2011 the community was fragmented, crime was an issue and many shops were empty or shuttered. The situation is now transformed and this is due to the combined efforts of council and community. The night time economy is stronger and increased footfall creates natural surveillance.

There is a positive effect of the intensive play and sports areas built alongside the Plaza. We heard about the St Gabriel’s family centre and the health centre, both very close to the street.

The mainline to Liverpool Street is at one end of the street and the Victoria line tube station a mile away at the other end. Numerous bus routes add to the high connectivity of the street.

The panel wonders whether the Marlow Road Estate development is going to enhance this connectivity. The masterplan seems well considered and Countryside Properties have a good reputation, so we hope it will enliven the street.

There will be a big impact in social, retail and connectivity terms and the execution will be crucial to its success. It will be fascinating for the Academy to visit again when the scheme is finished and occupied.

This is an exciting and inspiring street that shows what can be achieved in five years of collaboration. The determination of all parties involved is admirable. This is a great street that has benefited from a combined council and community initiative to give life and interest. We believe it would be a worthy winner.