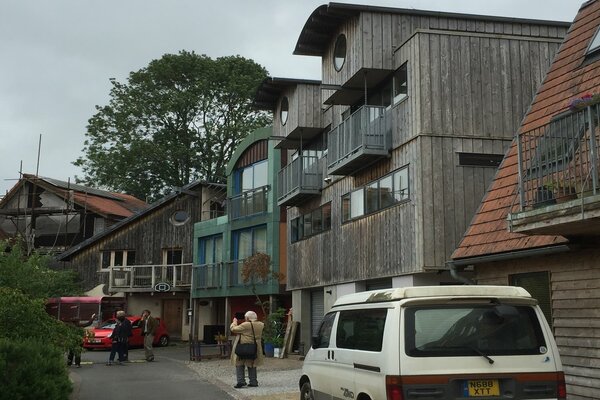 1. Ashley Vale Yard project is an exemplar of the success of community control of housing development within a market economy – including the acquisition of land; planning and providing the infrastructure and co-operative self-build development. Although not the first self-build project in Britain it has become a national and international model of good practice.

2. The structure and governance of the Yard project is one that can, and is being used elsewhere. However, because the project did not have the mechanism to affect future house resale costs through common ownership, it risks losing the ‘affordable housing’ values it started with.

3. The Yard has benefitted from an innovative and light touch approach from the local authority, which it took considerable community encouragement to achieve, and became essential to its success.

4. The project shows that housing development by commercial mass house builders is not inevitable but it can demand huge individual and community commitment and risk taking to challenge and change the conventional processes even in the context of a city that prides itself in its response to innovation.

When a former scaffolding yard in Ashley Vale, Bristol closed, releasing a large site in the centre of a residential area, local people wanted to see a development that would work for the benefit of residents of neighbouring streets. A group of active people realised that instead of simply preventing a conventional housing development taking place it should take a positive role in presenting an alternative. It realised that it needed to be an effective and properly constituted organisation if it were going to be taken seriously and formed the Ashley Vale Action Group (AVAG). The 10 original directors negotiated the purchase of the land and invited interest from self-builders, and masterplanned the overall site. Collectively the self builders financed the purchase of the yard and then developed their plots with different designs suited to their individual and family needs. They also became responsible for the management and maintenance of common areas, access and shared spaces.

This is conceptually and practically a fine example of good practice in urbanism because it shows how a people with a common purpose can take control of the development of their own neighbourhood and, with the support of an innovative City Council, created an interesting, sustainable and bespoke living environment that suits their needs and creates what is now regarded as a national and international exemplar. It comprises a number of individually designed houses that are self built and, therefore, reflect the needs of individual builders/occupiers. With the exception of a small row of houses built by the Action Group for self-finishers, every house is unique and distinctive. Although the architecture is to a certain extent haphazard, sometimes eccentric and bears no aesthetic relationship to the surrounding terraced housing it nevertheless works because it exemplifies a community spirit as well as a place to live.

The first self-builders entered the scheme because it gave them an opportunity to own their own home. The building process encouraged people to share skills, knowledge and experience. As properties have been sold on they are fetching high prices, which is likely to change the demographic mix. At the moment there are a number of families with young children and it is clearly a safe place for children to live and play and, therefore, attractive to young families. There are also much older residents who have brought up families in the area and bring different skills to the mix. Although the basic structure of the buildings is similar (wood frames on relatively light foundations) the design of the houses varies enormously from Gaudiesque to Modernist reflecting the ideas, creativity and aspirations of the builders. There is also a community owned hall, the Wildgoose Space that is the focus of many activities, along with the small area of common open space in the centre of the development. AVAG administers a small community fund that will support local business initiatives including, for example, a pop-up pizza restaurant that serves community events.

The self-build community created the public realm and core infrastructure including un-adopted roads and community open space and it has joint responsibility for their maintenance. The area has a distinct identity in part because it is entered through its own ‘portal’, which is a tunnel under a railway that has been decorated with creative graffiti. The visitor is immediately aware of the planting areas that delineate parking spaces on the public highway helping to create a safe Home Zone. There are unadopted streets with a 5 mile speed limit and speed humps that appear very safe and self-policing, even allowing children to play safely. The development bleeds onto surrounding roads with no pavements, fully integrating the housing into the surrounding road network. To its credit the City Council highways department must take a very open-minded view of the arrangements in Ashley Vale allowing the local community to affect parking and traffic management.

Adjacent to the development is the St Werburgh’s city farm, a popular visitor and educational destination; a very distinctive café designed in an organic Gaudiesque style by a local architect and a pub, The Farm. Although these are not part of the Ashley Vale project they are a distinctive part of its context and reflect the values and ambitions of the local residents.

Environmental sustainability is one of the core values of the self-build project reflected in the choice and reuse of materials and encouraging local biodiversity. The community embrace sustainability with car sharing, sharing tools and collective food purchasing. An existing office building on the site has been converted into flats, workshops and community space and a district heating system including solar and biomass heating was installed.

The philosophy of self-help and mutual support that is exemplified in its construction and in its management is very striking. However, as there is no collective ownership of the housing the concept of affordable, self-build housing is giving way to market forces and properties are fetching very high prices and there is a danger that the initial collective spirit may change. Newcomers to the project so far have bought into the idealogy of the scheme and have brought new energy to collective input, keeping the community fresh.

Ashley Vale is a model for other self-build projects and regularly receives visits from urban planners, designers and regeneration specialists from around the world who benefit from the lessons informing urban design, architecture, social organisation and community action. It has generated the local social enterprise, Ecomotive, which has a national role in the promotion of self-build and community led development and has helped establish the Bristol Community Land Trust.