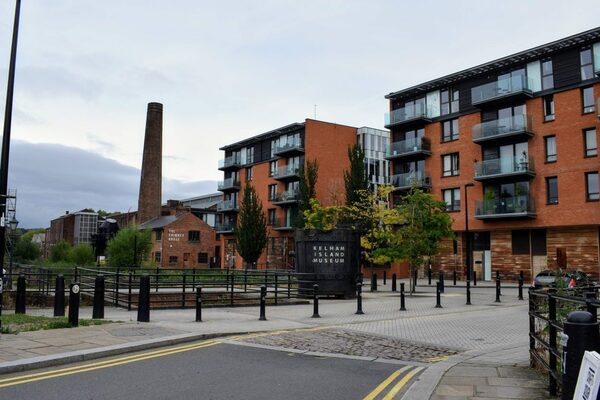 As in all good neighbourhoods, leadership in Kelham Island/Neepsend is a successful combination of the local authority conservationists and members of the local residential and business communities working together with enlightened developers for the common good of the area.

The history of Kelham and the story of its regeneration is different from the other places visited for the 2019 awards. With no quick influx of cash, and no large-scale demolition or construction, it is a ‘slow-cooked’ neighbourhood, where change has occurred at a natural and organic pace. The regeneration is more about evolution, rather than revolution.

Kelham Island’s core identity undoubtedly lies in its industrial roots, from the construction of the 12th Century Town Corn Mill by Norman lords which created an island in the River Don, through to the Industrial Revolution when larger enterprises flourished including silk and cotton mills and the city’s still internationally renowned steel works. It was around this time that back-to-back terraces and courts were hastily built to serve the area’s industrial workers. Poorly built and without proper sanitation, this housing underwent slum clearance in the mid-20th century, depopulating the area in favour of more industrial and commercial uses.

Economic decline in the 1980s left abandoned and derelict industrial buildings, and the area attained notoriety for street crime, drug misuse and sex work. In 1982 the council opened Kelham Island Industrial Museum in a former power station on the original island celebrating the area’s industrial heritage. Three years later Kelham was declared one of the first industrial conservation areas bringing subsequent environmental improvements and the development of private and social housing and a variety of alternative uses for remaining industrial buildings. The opening of the museum was a great boost to the area enabling others to see the value of the place and its unique location; enhanced by the pioneering development of the Kelham Island micro-brewery, one of the UKs first. The multiplication of small local breweries within the area has brought life and industry back to formerly disused units, while ‘The Sheffield Ale Trail’ ensures that it is a destination supporting the lively night time economy. A landmark pub, The Gardeners Rest was saved through community ownership and has a strong social inclusion policy.

A great strength of the area is that Sheffield Council has zoned a significant area for solely industrial and appropriate ancillary uses retaining some long standing small scale manufacturing industries and crafts which has created opportunities for noisier cultural and creative industries to develop alongside these. Amongst these are very good value artist studios and a gallery operated by the Kelham Island Arts Collective. As there is relatively little pressure for changes of use to former industrial buildings it is very likely that these creative uses have a reasonably long life span. In 1997, Yellow Arch Studios was founded in a former nut and bolt works. Combining rehearsal spaces, recording facilities, music teaching, an event space and a bar it is at the centre of Sheffield’s internationally famous music output. In other parts of the area new housing, conversions, bars, restaurants and other commercial activities have been encouraged.

The area is very representative of the industrial heritage of Sheffield as a city famous for the production of high quality steel products such as cutlery and tools. Its location around a goit (industrial mill race) on the River Don gives it a special character which is exploited well. More recent development has created a destination for visitors because of its excellent pubs, cafes and restaurants and the monthly Pedlars street food market. The quality, pace and control of change are all examples of good practice.

From modern riverside apartments to properties in converted mills there are now nearly 5,000 people living in the neighbourhood. From the outset, the first residents established the Kelham Island Community Alliance in 2000. Its projects put residents at the heart of the area, ensuring a safe and enjoyable place to live, work and socialise. Their key initiatives focus on protection of the environment and social inclusion, notably the Green Kelham programme, the ‘Ball Street Deli’ farmers market, the arts and heritage trail, and the establishment of a statutory Neighbourhood Planning Forum.

Kelham Island as an industrial area had no public open space apart from the odd corner, however, new spaces and places have been created in developments and around the goit (the former mill race) and museum. Riparian owners are allowing the community organisation to tidy and plant riverbanks and these and the partly revegetated goit are being managed as areas for wildlife by local people. A number of social and commercial activities focusing on health, well-being and social support have been created in Kelham. For example, the Foundry Climbing Centre, established in 1991 has health and exercise programmes for residents. Support networks are critical in recognising and addressing social issues in the area and in 2005 Sheffield Working Women’s Opportunities Project was founded, providing practical support to socially isolated and vulnerable sex workers.

New spaces and buildings are well designed and respect the industrial street pattern and buildings in scale and simplicity of design. The largest and most interesting new development is Little Kelham, which has adopted some very contemporary housing types, energy efficient modular construction buildings, diverse cladding materials and innovative construction methodology. It has a Scandinavian aesthetic, but by utilising former industrial buildings as its gateways, it is a subtle and welcome contemporary intervention and will create new public spaces and routes.

The regeneration of the area is based on the reuse of its distinctive industrial buildings and spaces and focuses on the retention of the industrial heritage of the area either through the retention of existing uses or the introduction of contemporary cultural industries. In doing so the local authority and community association have done more than just preserve the character and the functions of the area, they have ensured that current economic demands can integrate with traditional ones and provide a sustainable base for a thriving and close-knit neighbourhood.