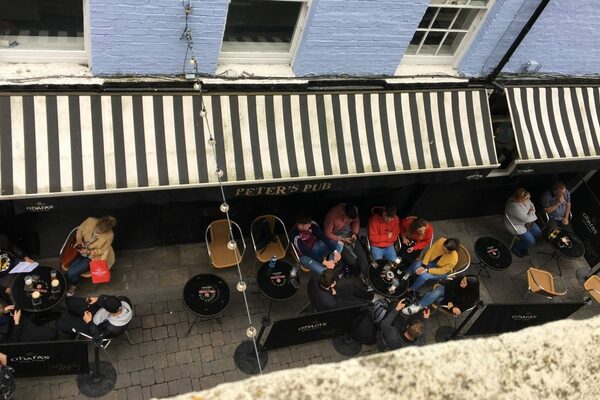 This street is diverse, vibrant and open to change. The published plans by the city council have formed a basis for revitalisation over the last ten years. This has been reinforced by an entrepreneurial spirit amongst the street’s retailers and workers to create an exciting example of an independent street making great progress.

This is one of Dublin’s most important intact Georgina Streets. The Grafton Street Quarter Public Realm Plan is integrated and supported by the City Business Improvement District (BID). The assessors were impressed by the way the Council and BID work together. It was also interesting to note that the genesis of much progress was a report by Dublin Civic Trust ‘South William Street Area Study’ commissioned by Dublin City Business Association in 2012, at a very difficult time for the Irish economy.

The Grafton Street Quarter Public Realm Plan aims to “ensure that the area works successfully as an attractive destination for workers, residents and visitors.” This aim in on the way to being successfully fulfilled on the evidence we saw. Both Coppinger Row and Castle Market provide spill over spaces for the street. Grafton Street, Wicklow Street, and to a lesser extent Exchequer Street and South Great George Street, are the primary retail streets and allow independent businesses to flourish. The BID takes a keen interest in the street. It is the biggest BID area in Europe with a large turnover. Arguably the BID area is too large for a single BID. There is a dedicated Project Manager for who has developed good relationships with local businesses.

The edges of the street are mainly four-storey Georgian and the street is short with a dramatic view of Mercers Hospital (1734). Both ends have a sharp change of direction. These inflections of street grid give a strong character to the street. The connection to Castle Market, and via South City Markets (1881), to South Great Street is very clear.

The street is embedded in Georgian Dublin in a very direct way and it reflects the commercial and artistic aspirations of the City. The local granite is from Leinster and this is used for buildings, flagstones, cobbles, and kerbs. In 1998 the City repaved part of the street and created a 70-metre long granite ‘platform’ in front of the Townhouse. This was innovative at the time and acted as precedent for similar schemes city wide. It is one of the hardest working spaces in Dublin and will soon be refurbished. The initial proposals for these works seem of a high quality. However, the team felt that the scheme could be more adventurous in terms of reducing on street parking, increasing cycling facilities, restricting deliveries and vehicle movements.

For much of the 20th century the area was centre of Dublin’s Rag Trade with textiles and clothing dominating the street. When these users moved out, the rich mix of small-scale spaces with low rent appealed to a broad range of occupiers. In the last year a vibrant café culture has grown in the area backed by two famous pubs, Grogans and Peter’s Pub.

Powerscourt Townhouse has been a gentleman’s Georgian residence (Viscount Powerscourt), then government tax office from 1815 and Ferrier Pollock & Co’s wholesale textile warehouse to the late 1970’s, and now Powerscourt Townhouse Centre. The works completed in 1987 are excellency examples of creative reuse at a time when such ideas were not so common. The Irish HQ of the AA is housed in one of three 1960’s terraces these. It would be good if future renovations enhance their robust character whilst improving them environmentally.

The street has been in a flux of constant reinvention and this gives it so many good amenities. Very few people live in the upper floors above shops, but the City hopes that the Living City Initiative (LCI) tax incentives, which began in 2015, will encourage conversion to residential on upper floors.

Surveys have shown that the footfall is the same at 11am as 11pm which demonstrates vitality across day and night. However, deliveries and vehicle movement dominate the street. This special street could have special attention paid to these issues, ideally minimising opportunities for vehicle movement. The ‘Architectural Conservation Plan’ emphasises working with local traders to ensure the continued enhancement of the street. Ideas about creation of new public spaces at Johnson Place and Stephen Street sound very positive.

The street is animated over 16 hours a day and it self-policed by the fact that the retailers know each other well and respect their different activities. The Purple Flag has been awarded by independent assessors for the Association of Town and City Management. This recognises that the area is an “area of excellence, especially in the evening economy.”

This tight urban street has little opportunity for greening and recreation. However, the aspirations for new spaces should address this. It is close to one of Dublin’s best public parks, St. Stephen’s Green. The Dublin Holistic Centre provides a range of indoor life-balancing activities and treatments.

South William St has demonstrated an enduring ability to reinvent itself to align with the trends of the day. The street has transformed itself from the bustling heart of the rag trade to a well-known spot for retail entrepreneurs, start-ups and those in search of a good night out. There is an extraordinary range and scales of retail and services from fortune tellers to progressive fashion. It is a city in miniature, with a spirit of collaboration which is driven by the compact and fine-grained character of the street. Commercial activity contributes to the public realm in innovative ways, from the florist display on the steps of Powerscourt Centre, to the on-street video game and tractor seats at a café serving hatch. It would be useful to have a rigorous understanding of why this street, rather than another, had just the right mix of ingredients for enduring commercial reinvention. The potential threats to these ingredients for success are when success creates rent spikes.

The Public Realm plan supports minimising of carbon footprints and is committed to reducing street clutter. Big Belly Compactor bins are part of this initiative. However, the assessors saw little current evidence of these good ideas being implemented. There is an obvious shortage of suitable facilities to secure bicycles.

The South Side City Retail Quarter Architectural Conservation Plan gives very clear parameters for future building works. All works should conserve and enhance the existing street and there are specific clauses which discouraged pastiche in new developments. Better access for people with disabilities, the elderly and the very young are especially needed in this street and we did not see evidence of this. The car and the van were seen to dominate the street in terms of parking and traffic movement, at times, during the day.

There are three educational buildings, and eclectic mix of eating and drinking places and a range of shopping opportunities from high end fashion art galleries, beauty therapy and craft through to two long-established adult stores. A food market in Coppinger Row on Thursdays adds another element to this promiscuous and lively mix.

The street is well connected to within Dublin’s city centre. The pedestrian connectivity is determined by the historically narrow nature of the streets and lanes in this very permeable part of Dublin. Historic buildings also form part of this permeability, with both the George’s Street Arcade and Powerscourt Townhouse forming a part of complex pedestrian routes. The City Public Realm Plan has been in place since 2014. Given the significance, architecturally, commercially and culturally of the William St, it would be worth prioritising the implementation of the recommendations in the Public Realm Plan for this street. The contrast between the parts of the street that have been upgraded and those that prioritise vehicles is stark, and there is clearly a need for on street cycle parking. The team felt that the delivery restrictions used elsewhere in Dublin are urgently needed here. Traffic dominance has diluted many of the street’s wonderful characteristics.