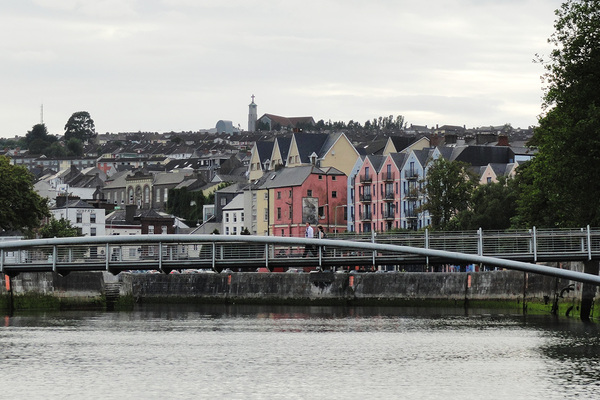 The City perceives a positive benefit for regeneration in fostering an environment of openness and inclusivity.

2. The importance of international ties

It is dynamic in forging international relationships – the Council has strong ties with China in many areas of work, and is successful in attracting investment on the back of its quality of life.

It recognises that the strong identification with food contributes to life on the street and creation of connections. The commitment to hosting events throughout the year reflects their contribution to economic and cultural sustainability.

Despite the deep recession and relative isolation, there is a spirit of getting things done and the benefit of commitment to growing in stages.

Intervention by government and local authority to create good social housing and neighbourhoods, is being delivered during a period of austerity. The quality of design achieved by the City Architects is commendable.

Ireland’s second city, lying at the South West periphery of the country, Cork has always looked to its links across the sea as much as to the centre. It is an historic port at the head of a large natural harbour, but the older quays are largely devoid of maritime activity as, typically, the increased scale of shipping and port facilities has resulted in relocation downstream.

Cork is rich in urban character, largely reflecting its mercantile inheritance with quaysides lined with robustly designed warehouses and classical civic and commercial architecture; a compact medieval core of narrow ‘burgage’ plots; spacious shopping streets and market places built over infilled channels; fragments of Dublinesque Georgianism; pleasant mid 19th Century residential streets in loose hillside terraces; leafy suburbs to the west and sprawling 20th Century suburbs of mainly social housing on the periphery. The skyline is still characterised by church spires, other than a couple of recent office towers. Colourfully painted rendered facades alternating with the local limestone give the streetscapes their local distinctiveness. The designation of 31 Architectural Conservation Areas and numerous Protected Structures underlines the positive and diverse character of Cork.

Cork is palpably an attractive place to live and to visit. It is large enough to have a very active arts and cultural scene, and a cosmopolitan character rooted in its maritime heritage, which importantly is growing today, as incomers are attracted to its lifestyles. The city prides itself on its inclusive and liberal attitude, exemplified in the recent Gay Pride events. Cork is however small enough in size and scale to retain an intimacy. The streets of the centre and the waterfronts are generally lined with active frontages, not least as the city has escaped the worst effects of the dead frontages and monocultures of unsympathetic large scale development. It is a very walkable city, due to its fine grained network of streets and quaysides.

Street markets and the indoor English Market contribute to the bustle evident in the major and minor shopping streets. The public realm has seen considerable investment in recent years, in the creation of shared surfaces in the main shopping streets, market places and in the improvement of a stretch of quayside, providing access to boats. Well considered lighting contributes to the scene. The programme of events and festivals extend throughout the year and themes include food, music, film and communities. The proposed cultural venue on the curving river frontage in the core of the old city, with new links across the river, continues the Council’s commitment to quality new architecture.

Cork is experiencing success in attracting international ICT companies including Apple, who find that the character of the town and its vibrancy appeals to their workforce and their families. The University College Cork and Cork Institute of Technology campuses with a total student population of 35,000, are also crucial to the attractiveness of the city for business ‘incubation’ and research and development. Links are being forged with China; Chinese graduates often work with the Council on internships and exchange programmes.

Due to the stringencies imposed following the severe financial crisis in Ireland, Cork has recognised that it has to be nimble and creative in its deployment of limited resources. It is enabling and intervening to aid the regeneration of the city in partnership with many non-governmental bodies, agencies and enterprises, and central government, through the City Centre Strategy. Cork City Council and County Cork, which surrounds the compact city, are at present negotiating some enlargement of the city boundary.

The improvement of life in the peripheral residential areas is a focus of intervention by the City through a government targeted initiative and the City Architects. Replacement social housing and neighbourhood facilities, incorporating placemaking principles, energy efficiency, recycling storage etc. is impressive. The Foyer Project, where young people are encouraged to care for animals in a micro zoo and to grow their own food, selling some through an on-site café is also noteworthy. Elsewhere, areas of formerly ‘left over’ space have been converted to well-used community allotments. The City works with business development bodies such as ‘Cork Innovates’ and ‘EnergyCork’ to promote opportunities especially for smaller enterprises.

The problem of vacancy of city centre upper floors (so common in many towns and cities) is an issue that is currently being addressed. An interesting scheme designed by a local architect working with the City demonstrates how the long narrow high street plots can be adapted for attractive high density small housing units. Also, the re-use of historic churches and other buildings for community and cultural uses further contributes to the social sustainability and use of embodied energy in the city centre.

Flooding is the main environmental challenge facing the low lying city centre, leading to recent restrictions on development areas and new building design. Non-car use is being encouraged through the City Centre Movement Strategy, through a planned cross town rapid bus route and enhancement of cycle and foot routes. Cork demonstrates that in a challenging climate of resource restriction, both vision and optimism can contribute to its continuing commitment to regeneration and the promotion of a vibrant sense of place.